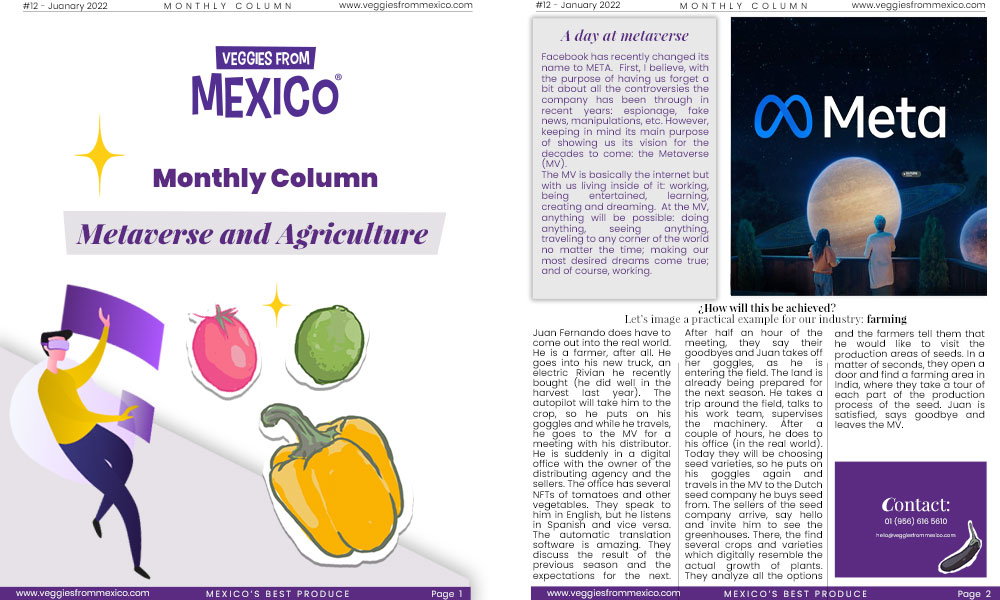 A day at the Metaverse,

Facebook has recently changed its name to META.  First, I believe, with the purpose of having us forget a bit about all the controversies the company has been through in recent years: espionage, fake news, manipulations, etc. However, keeping in mind its main purpose of showing us its vision for the decades to come: the Metaverse (MV).

The MV is basically the internet but with us living inside of it: working, being entertained, learning, creating and dreaming.  At the MV, anything will be possible: doing anything, seeing anything, traveling to any corner of the world no matter the time; making our most desired dreams come true; and of course, working. The MV is not from META (formerly known as Facebook) but from all who are able to participate: Microsoft, Bitcoin, Roblox, Nvidia, Apple, Disney, etc.

How will this be achieved? Let’s image a practical example for our industry: farming.

It’s 5:30 am and farmer Juan Fernando Galaz wakes up, turns off the alarm: the hologram of a rooster singing says good morning to him. He takes a shower and goes downstairs to the garden of his house, has a delicious coffee from Chiapas. His older daughter comes by and says hello and goodbye, as it is time for college at the metaverse. She goes to UC Berkeley from home. The young lady puts on her goggles and gets immersed in her avatar, which is a true copy of her in the real world. She chooses the clothes she will be wearing for her character in the virtual world and travels to her classroom. Carolina is taking a Bachelor’s degree in Latin American Literature and her professor is none other than Isabel Allende (or… Her avatar).

His son Carlos, on the other hand, wakes up at 6.30 am. Carlos wakes up to the Dua Lipa hologram. –Good morning, handsome –She says. –How thin and fresh you look-.  –Thank you –Replies Carlos.  His young son didn’t want to go to college, so he sells art and digital real estate properties, and he will be making a presentation of these office designs with their respective NFTs (digital art) on earth2.io at the multiverse.  These Chinese investors want an office in Digital Culiacán, so Carlos puts on his goggles, turns on his simultaneous translator to Chinese and goes into the MV to serve his clients (by the way, if you go to https://earth2.io/ you will see that in this digital world La Lomita, La Catedral and Culiacán airport have already been bought by Chinese and Americans).

His wife Luisa, after cooking breakfast for everyone in the real world (I don’t see a way how they can be fed in the MV!) she puts on her goggles.  She suddenly has in front of her eyes the best yoga teacher in the world… well, its avatar.  She is a bit self-centered, so the avatar she chose lost a few pounds, and also, got this new tights at the MV, which are a bit more colorful.

Juan Fernando does have to come out into the real world. He is a farmer, after all. He goes into his new truck, an electric Rivian he recently bought (he did well in the harvest last year). The autopilot will take him to the crop, so he puts on his goggles and while he travels, he goes to the MV for a meeting with his distributor. He is suddenly in a digital office with the owner of the distributing agency and the sellers. The office has several NFTs of tomatoes and other vegetables. They speak to him in English, but he listens in Spanish and vice versa. The automatic translation software is amazing. They discuss the result of the previous season and the expectations for the next. After half an hour of the meeting, they say their goodbyes and Juan takes off her goggles, as he is entering the field. The land is already being prepared for the next season. He takes a trip around the field, talks to his work team, supervises the machinery. After a couple of hours, he does to his office (in the real world!!). Today they will be choosing seed varieties, so he puts on his goggles again and travels in the MV to the Dutch seed company he buys seed from. He enters a digital front desk, where a beautiful Dutch avatar greets him. The sellers of the seed company arrive, say hello and invite him to see the greenhouses. There, the find several crops and varieties which digitally resemble the actual growth of plants. They analyze all the options and the farmers tell them that he would like to visit the production areas of seeds. In a matter of seconds, they open a door and find a farming area in India, where they take a tour of each part of the production process of the seed. Juan is satisfied, says goodbye and leaves the MV.

It’s lunch time and Juan is in the mood for chicken. He enters the MV again and makes a search for “El pollo loco”, enters the digital chicken house and places his order from the menu, pays for it, say thanks to the avatar who serves him, and his order will arrive in half an hour.

It’s 3:00 in the afternoon; he has a second meeting at the MV to see a packing line he wants to buy. In a matter of seconds he arrives to Italy, which is where they sell the equipment and the owner of the company greets him. Juan turns off the automatic translator, because he wants to practice his Italian. They start the negotiation without reaching an agreement. A credit will be needed. Five bank options will appear immediately, and he chooses to take one for the purchase.

It’s 6:30 in the evening. He goes into his Rivian and goes home. Juan loves the sunsets, so while he travels, he puts on his goggles and this time he will enjoy it at the MV. He likes the sunset at the beach, so he chooses Bora Bora between over 30 beach choices, to see how the sun goes down by the end of the sea.

What will really occur to this new world? We are living the same uncertainties of the internet in the 90s. Those which appeared to be large did not survive; such as American Online or Yahoo. What seemed ridiculous, such as selling books online, are now companies such as Amazon, dominating the market. What is a reality is that the Metaverse will come. In fact, it is already here. If your kids play Roblox or Minecraft, they already are within some of the Metaverse worlds. And, without a doubt, it will also get to our sector.