Monthly Column: Development of the AgriFood Sector from Sinaloa – Veggies From Mexico

Monthly Column: Development of the AgriFood Sector from Sinaloa 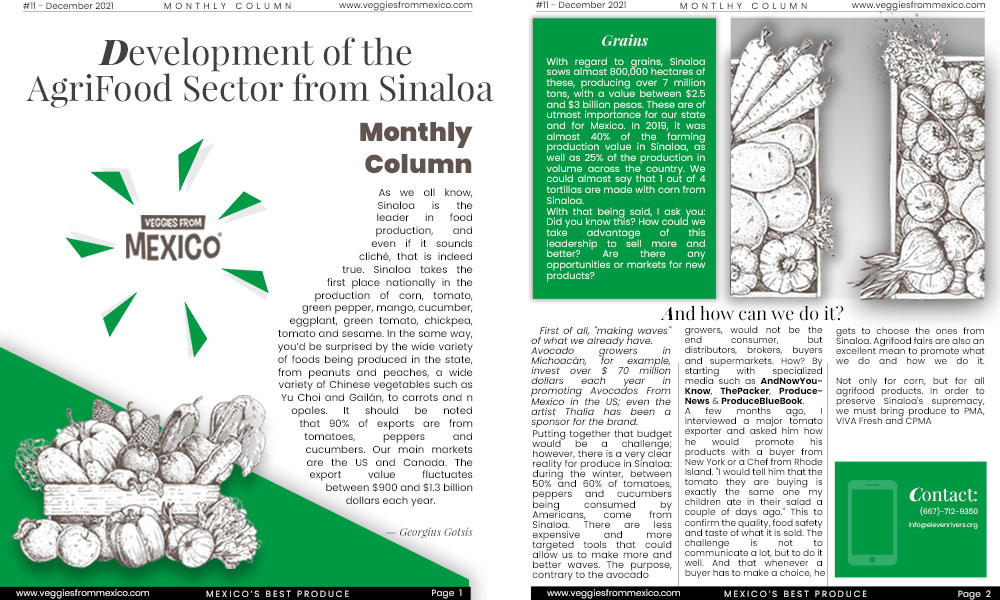 As we all know, Sinaloa is the leader in food production, and even if it sounds cliché, that is indeed true. Sinaloa takes the first place nationally in the production of corn, tomato, green pepper, mango, cucumber, eggplant, green tomato, chickpea, tomato and sesame. In the same way, you’d be surprised by the wide variety of foods being produced in the state, from peanuts and peaches, a wide variety of Chinese vegetables such as Yu Choi and Gailán, to carrots and nopales. It should be noted that 90% of exports are from tomatoes, peppers and cucumbers. Our main markets are the US and Canada. The export value fluctuates between $900 and $1.3 billion dollars each year.

With regard to grains, Sinaloa sows almost 800,000 hectares of these, producing over 7 million tons, with a value between $2.5 and $3 billion pesos. These are of utmost importance for our state and for Mexico. In 2019, it was almost 40% of the farming production value in Sinaloa, as well as 25% of the production in volume across the country. We could almost say that 1 out of 4 tortillas are made with corn from Sinaloa.

With that being said, I ask you: Did you know this? How could we take advantage of this leadership to sell more and better? Are there any opportunities or markets for new products?

Definitely, there are opportunities to preserve the leadership in agrifood sector. Although we are the third state in production, behind Michoacán and Jalisco, I would dare to say that Sinaloa is the one with the most opportunity to bounce back. And how can we do it?

First of all, “making waves” of what we already have. Avocado growers in Michoacán, for example, invest over $ 70 million dollars each year in promoting Avocados From Mexico in the US; even the artist Thalía has been a sponsor for the brand. Putting together that budget would be a challenge; however, there is a very clear reality for produce in Sinaloa: during the winter, between 50% and 60% of tomatoes, peppers and cucumbers being consumed by Americans, come from Sinaloa. There are less expensive and more targeted tools that could allow us to make more and better waves. The purpose, contrary to the avocado growers, would not be the end consumer, but distributors, brokers, buyers and supermarkets. How? By starting with specialized media such as AndNowYouKnow, ThePacker, ProduceNews & ProduceBlueBook.

A few months ago, I interviewed a major tomato exporter and asked him how he would promote his products with a buyer from New York or a Chef from Rhode Island. “I would tell him that the tomato they are buying is exactly the same one my children ate in their salad a couple of days ago.” This to confirm the quality, food safety and taste of what it is sold. The challenge is not to communicate a lot, but to do it well. And that whenever a buyer has to make a choice, he gets to choose the ones from Sinaloa.

In the case of corn, I have heard multiple times the possibility of making a brand for Sinaloa or get a designation of origin, claiming that the quality is better in our state. I’m not sure that a tortilla made with corn from Sinaloa tastes differently than one made with corn from Jalisco. For sure, I have no doubt that the best practices, technology, and input quality used by grain farmers in our state are higher than in other states in Mexico. So I cast a vote in favor to support the idea that each sack that leaves our states has the distinctive brand from Sinaloa. Designation of Origin (DO)? Maybe. It would be a long-term and expensive investment, but it may be worth it. Currently, Mexico has only 2 DOs which have everything and a Regulatory Council: tequila and mezcal.

In addition, being a non-GMO corn, there are a lot of possibilities to export it and to look for a better ROI. Just as the Sonora wheat has a captive market with Algeria with affordable prices. There is an opportunity due to current prices and the high corn demand in the world, to enter and sale in countries such as China, so that they know and stay with us. What does it take? The support from the grower to make a investment on tests and, of course, the support from SENASICA (the National Service for Plant Health, Food Safety and Agrifood Quality) to meet the phytosanitary requirements. What if we go to the SIAL Shanghai fair to promote our corn?

Agrifood fairs are also an excellent mean to promote what we do and how we do it. Not only for corn, but for all agrifood products. In order to preserve Sinaloa’s supremacy, we must bring produce to PMA, VIVA Fresh and CPMA. For fresh or processed and exotic products, you may go to the Fancy Food Shows from New York and San Francisco. In Asia, besides the SIAL, in Foodex Japan. In Europe; of course, Fruit Logistica in Germany and Anuga. For new markets: Gulf Food in Dubai or WorldFood in Moscow.

New products and market opportunities? Of course. Sinaloa, year after year, is ranked as a major player in the production of berries. And although the market is focused on North America, Mexican berries are literally flying across the world. Sinaloa could not be the exception and it must get to the European, Asian and Middle Eastern markets. What does it take? To display our product by means of the said fairs and events, but most importantly; good logistics in order to reach these countries. Another product that is growing year after year, which can also help our purpose is Persian lemon.

Some great recent news is that municipalities such as Mazatlán, Concordia, El Rosario and San Ignacio were granted the designation of origin for mezcal, by IMPI (the Mexican Institute of Intellectual Property), in an effort of the government from Sinaloa government and the farmers. Such processes can be long and exhausting sometimes, but this one was achieved. Mezcal is a unique drink that, unlike tequila, it must be 100% agave. In addition, thanks to the broad variety of agaves (Espadín, Jabalí, Tobalá, Tobasiche, Tepextate, Coyote, among others) we may find very interesting scents and flavors.