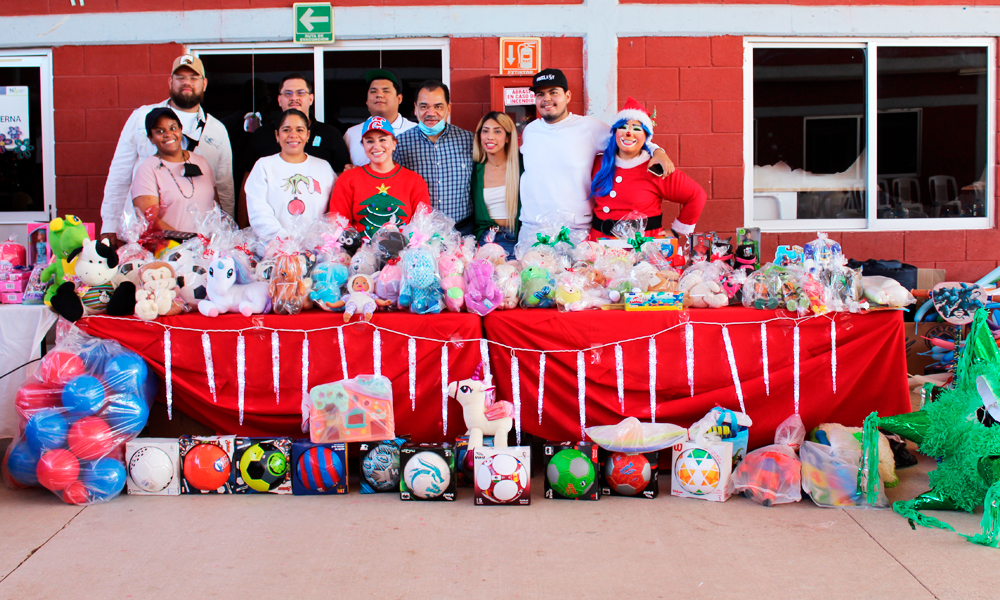 During December, the companies making up the Veggies From Mexico growing community celebrate their traditional Christmas parties for the children of field workers.

Boys and girls living in farming shelters and attending the party had a great time; as they were given toys, candies and everyone broke a piñata.

Year after year, the team making up the Community Development Center (CDC) Dorita from Agrícola Belher held their traditional Christmas party. Without a doubt, this year children spent a very joyful Christmas season among all the other children.

In cooperation with AFOMAC, IAP, a civil association which has a comprehensive program providing welfare to migrant labor families in our country, this company was in charge of providing each children a toy. Also, some of Agrícola Belher workers sponsored a child by giving him/her a toy.

During the Christmas party, a clown was in charge of playing with all kids and performing a variety of activities with them.

The team currently made up on Community Development Center (CDC) Dorita is integrated by:

In all three operations a Christmas toast was developed, award ceremony for years in service, award ceremony to the COVID-19 prevention surveillance committee, and a raffle of gifts for all the staff.

In these events, Diego Ley and Juan José Ley shared a message to the staff for their loyalty to the company, and thanked them for their commitment and effort during the COVID-19 pandemic.

These celebrations were accompanied by an exquisite food, drinks, a delicious cake, candy, jelly and, of course, toys.

These could not possibly be called parties without the traditional piñata, and the awards to winners of each of the games children played at these parties.

Christmas parties are emblematic parties being celebrated 9 days before Christmas. These start on December 16 and the big closing is on December 24.

In Mexico, when we are talking about Christmas parties, we refer to warm eggnog, candy baskets, lights and piñatas, but if we really look into it, we will find out that these have a religious origin.

History tells us that Christmas parties arrived with the Spanish conquest, changing the tradition of the Aztecs who celebrated during the month of Panquetzaliztli (December) the arrival of their god Huitzilopochtli. This celebration started on December 6 and lasted for 20 days, and consisted of placing flags on fruit trees and banners in the main temple.

But, with the arrival of Spanish men, the festivities entitled “misas de aguinaldo” (similar to “Christmas Gift Masses”) were established. These were carried out during December 16-24. Such masses were held in the open air, where passages were read and Christmas representations were performed, what we currently know as Pastorelas.  Also, small gifts were awarded to attendees, known as “aguinaldos” (similar to “Christmas Gifts”).

After the independence of Mexico, this tradition of going to “Christmas Gift Messes” celebrations disappeared almost completely. The loyal worshipers were the ones who rescued them and performed them in their own homes; giving birth to the “Posada” tradition.

The way of celebrating Posadas has been changing over time, and some elements of each region have been added. But, these have always been characterized by traditional colors, songs and food. Children, young people and adults come together to “ask for posada” (to ask for a place to spend the night) and celebrate that someone opened the doors and provided them housing.

Snacks, fritters, eggnog, candles, Christmas gifts (sweets or fruits) and smashing the piñatas are some of the key elements of posadas. But most importantly, it is about celebrating the union of families and friends.

We are aware of everything that a Posada entails; this is why here are some tips to make a sustainable posada out of your Christmas celebration. Follow them and enjoy these holidays while protecting the environment.