Monthly Column: Mexico and its balance with Russia & Ukraine – Veggies From Mexico

Monthly Column: Mexico and its balance with Russia & Ukraine 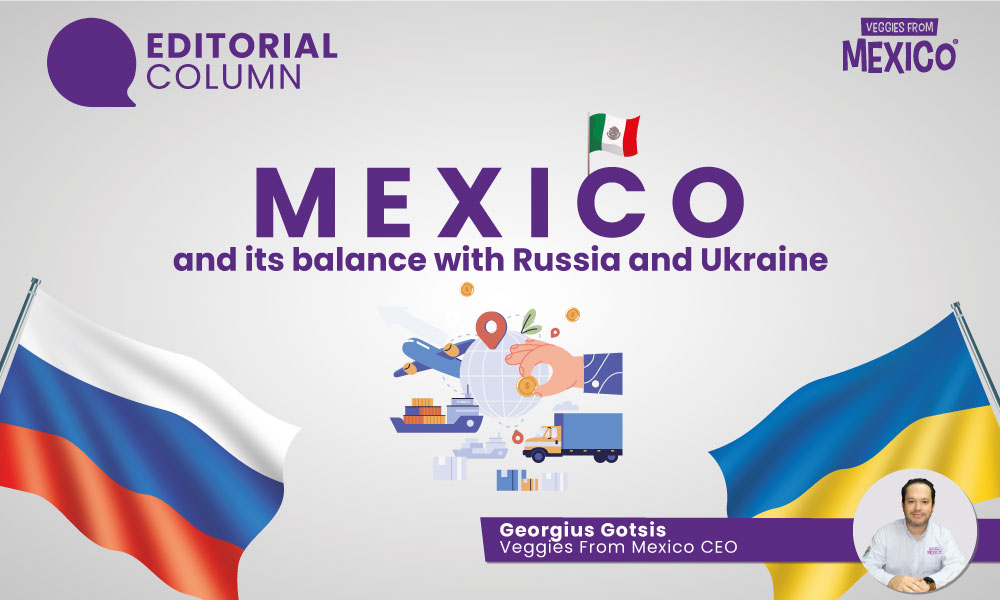 Last week we read in this column about the consequences of the Russia-Ukraine war in the food industry, particularly in the price of corn and wheat.  We highlighted the increase in supplies prices, but also the increase in prices of these grains produced in Sinaloa and the urgency of contracting them at the highest possible price.  Today we will share a more general analysis, looking for opportunities in these circumstances. This is mainly because Mexico has not completely closed itself to a commercial relationship with Russia.

Let’s make a pause here. Russia’s main fruit trading partner is Turkey, from which it imports more than $5,000 million dollars. Given the tense situation between both countries, Mexico could seek to replace part of that volume mainly with grapes, citrus, berries, melons, and dried fruits. These are products that Mexico has been able to export over long distances. The current logistical situation would have to be analyzed, as well as the political implications.

On the other hand, Mexico imported from Russia in 2020 goods for a value of almost $870 million dollars (we record a negative trade balance). The main imported product is fertilizers for an amount of $341 million dollars.  This represents 24% of the total fertilizer imported by Mexico ($1450 million dollars), so as a country we will be seriously affected in terms of availability and cost.

Within the food world, Mexico imports almost $23 million dollars of cereals and grains, out of a total of $4,900 million dollars that our country received in 2020, with Russia being of little significance.

In the case of Ukraine, the trade relationship is much smaller. Mexico exports only $23 million dollars, being beer from Mexico what they receive the most.

Ukraine’s exports to Mexico in 2020 amounted to almost $100 million dollars. Of which $21 million dollars are fertilizers, so its contribution is not very representative.

It is worth mentioning that Russia is the main exporter of fertilizers in the world with $6,995 million dollars, which represents 13% of the $55,560 million dollars exported around the world.  China follows with a slightly lower amount, followed by Canada and the United States. On the importers’ side, the main importers are Brazil, India and the United States. Mexico is in 9th position as a world importer.

As mentioned, the invasion will have strong repercussions in Mexico if the sale of Russian fertilizer is closed. In addition to the increase in fuels, we will have high costs for all our activity. This for both grains and vegetables. And unlike grains where attractive futures are expected, for vegetables we do not know the markets.  As a result, with higher costs and an uncertain future, tomato, bell pepper and cucumber growers will have to take another difficult challenge to be able to feed North America.