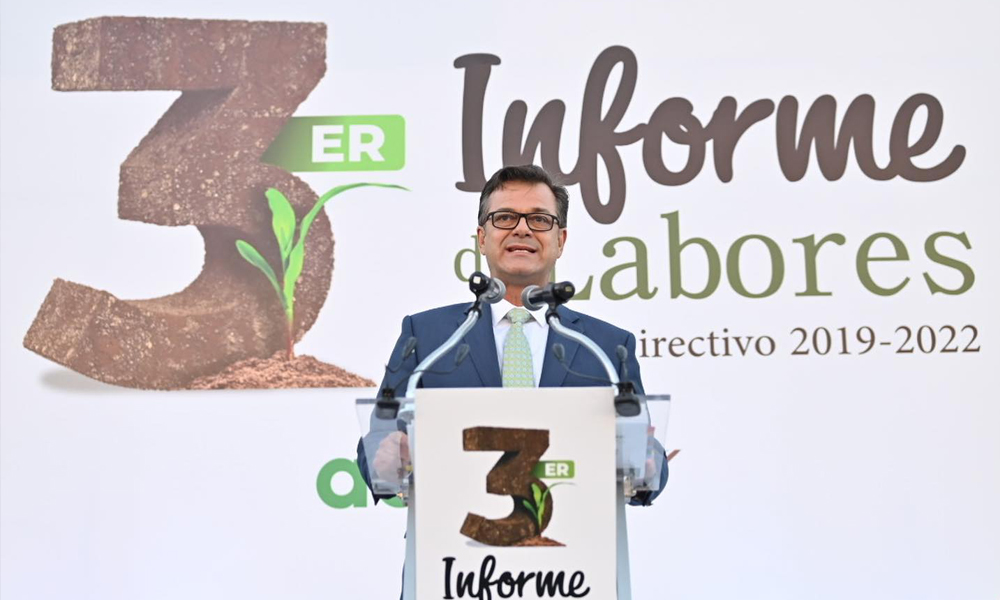 Last Thursday, March 10th, the yearly work report of the “Asociación de Agricultores del Río Culiacán A.C.” (AARC) and the inauguration of the grain processing plant took place. We congratulate the outgoing President Enrique Rodarte for his administration and all the members of the Steering Committee 2019- 2022 and Congratulations to the new president Enrique Riveros.

In his message, Mr. José Enrique Rodarte Espinosa de los Monteros said that the three-year period leading the association as board of directors is coming to an end, a period in which the maximum effort was put to defend the interests of growers and strengthen the association, so that it can continue to provide more and better services to its partners and business allies; thereby seeking to earn the trust, working in an honest and transparent manner, always putting the interests of their members first, which is the true essence of this farmers’ association.

He also added that, in these nine decades, an independent and self-sufficient Growers Association has been consolidated, staying united around the same goal, that of turning the valleys of Culiacán and Navolato into the most productive in the country.

“Through these 90 years we have become the number 1 growing region in Mexico in the production of tomatoes, peppers, cucumbers and corn. And it is not only with volume, our products stand out for being of the highest quality.”

In the presence of members, growers, municipal and state authorities, the president of the AARC highlighted that, despite the sanitary and economic difficulties the nation is going through, commercial agriculture in Mexico represents 4 percent of the national GDP, and that the agri-food sector as a whole represents 9 percent of the national economy, becoming a great generator of foreign exchange with exports of more than 44 billion 442 million dollars in 2021, more than oil and tourism. Almost 14 percent more than the previous year.

He also added in his message that the population employed in the primary sector in the fourth quarter of 2021 represented 12 percent of the national total, equivalent to 6,8 million workers, where Mexico ranks ninth in food production worldwide, being the seventh largest exporter of food in the world.

Inauguration of the Grain Processing Plant

Rodarte Espinosa de los Monteros celebrated with the guests at the event, the opening of the new grain processing plant, which cost more than 80 million pesos, considered the most modern, efficient, and safe of its kind in the country, and ready to be certified and to be able to export to any market in the world.

“This great project was carried out, partly with our own resources and with financing from the Danish government, who in order to encourage exports from their country granted guarantees known as EKF, with which the commercial banks in Mexico granted the credit, for which he thanked Banorte and FIRA for their trust.”

This plant, he explained, will give all the partners and commercial allies the opportunity to add value to their corn, beans and chickpeas, without the need to invest large amounts of capital in infrastructure, and thus have a way to sell their products at a better price, in addition to avoiding the expense of local freight to store their products, since the refrigerated warehouses are right there in the plant.

Finally, Jose Enrique Rodarte, called for unity, to continue to stay together as an agricultural sector, both social and private, small and large farmers, to remain united always looking for better conditions for the field, for the marketing of their crops, for the defense of treaties, tariff and trade threats.

Main characteristics of the plant

It is equipped with state-of-the-art machinery, ready to provide the receiving service, with a new reception area for grains, beans, corn and chickpeas.

-This machinery increases the efficiency in the receiving maneuver, up to 50 tons per hour, thus reducing the unloading waiting time.

-Seven new storage silos, with an installed capacity of up to 500 tons, will allow producers to continue the threshing process.

-The new processing hall will screen accurately at a rate of up to 10 tons per hour, consisting of a screen, destoner, size classifier, gravity table and casing machine, capable of storing up to 1,100 tons of grain.