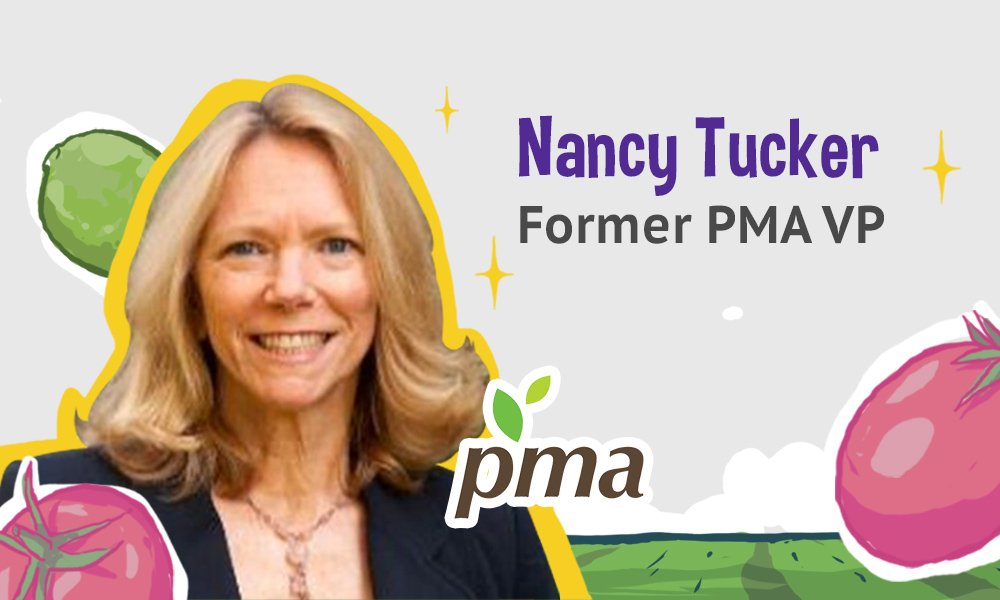 Nancy Tucker, who has had a storied career in produce, has been a fixture of PMA’s global work since the early 1990’s. Announced her retirement at the Fresh Summit 2020 Global Community Reception as Produce Marketing Association Vice President.

“For more than 40 years I was immersed in the global produce industry. What a privilege it’s been to work with such delicious, colorful, and healthy products – and the amazing people that grow, ship, and sell them”.

How many people get to use their their university degrees throughout their career? I was fortunate that my Bachelor of Science in Food & Nutrition and in Business Administration MBA in Marketing supported me through the years.

Being in the middle of the baby boom generation meant a lot of competition when trying to get a job after university. My first job was with ARA Food Services (now Aramark), managing foodservice operations in schools, hospitals, and businesses. It was a great learning experience with some interesting moments such as having to dress up as a hula dancer for a Hawaiian themed promotion! Certainly, this is not something that an employee would have to do today, but remember it was the late 70’s.

Wanting to move to another career, I went back to school full time for the MBA but ran out of money after just one semester. Fortunately, my job search turned up two great options – a position with PMA and a fellowship with Drexel University. The confirmation of the PMA position came two weeks before the offer from Drexel. I sometimes wonder what life would have been like if the timing was reversed, but I don’t regret my decision at all. My life has been so enriched by my experiences and the people in the produce industry.

In March of 1980, there were only 10 people working for PMA. It was a tight-knit group of professionals working under a leader, Bob Carey, who was a master in association management and advancing the industry.

At that time PMA was the little association, compared to the much larger United Fresh Fruit and Vegetable Association – the David vs Goliath. But it was visionary in the way that it pulled the industry together. In the late 1970’s, PMA reorganized its volunteer structure to vertically integrate all sectors of the industry in their boards and committees. This was radically different from the old style of growers, distributors/wholesalers, retailers, etc. each having their respective boards and committees.

Connecting people from all parts of the supply chain enabled them to learn of the challenges and opportunities in each sector as well as solve problems on an industry level. This type of organization, and its emphasis on the consumer through the supermarkets and foodservice operators, enabled PMA’s rapid growth through the following decades.

My first PMA convention & exhibition was in Chicago in 1980 where everything was in one hotel – the workshops, the expo, receptions, participant rooms, etc. There were just 3140 attendees and 233 booths. Compare this to the 2019 event which welcomed nearly 24,000 people from 70 countries and an exposition of 1200 exhibitors, most with multiple booths!

My initial work with PMA was encouraging influencers to tell people to eat more fruits & vegetables. These were school teachers, dieticians, university staff, and others. These people were hungry for for the resources we provided through the PMA booth at their annual conventions.

Fruitsy Tootsy, the star of a filmstrip and workbook, looked quite a bit like the Chiquita lady with a huge hat of produce. She captured the imagination of the K-3rd graders and PMA received requests for this filmstrip for many years, as well as the produce posters, recipes, tips, and more that were created for all ages.

In the mid 80’s, supermarkets wanted to do more to promote the nutrition power of fruits and vegetables, but there was no data acceptable for nutrition labeling. PMA worked with the US Food and Drug Administration to create a methodology that would sample a fruit or vegetable from different points in the country at different seasons to finalize a nutrition label with a 95% assurance level. Various companies and commodity groups sponsored this research to be able to highlight their super powers. The nutrition labels we pioneered are still being used today.

Being a Woman in the Industry

When I was hired, I was the first non-secretarial staff person at PMA – then the first woman manager, director and vice president in the association. As the years passed, it’s been great to see women in significant volunteer leadership positions on the boards and committees of the association. Similarly, women on the PMA staff command significant senior positions, including the president, Cathy Burns.

But in the 1980’s and into the 90’s, there were not a lot of women in the industry. Being physically different was an asset in my global work. The only country where I was mistaken for a local was Sweden and that was by a couple from Guatemala (it was great fun to swapped stories with each other in Spanish). In most countries, it was obvious that I was a foreigner. This accorded me a certain amount of respect that was augmented by representing PMA which had and has a very good reputation.

The beginning of 5 A Day and new global responsibilities

The 5 A Day for Better Health started in the late 80’s in California. PMA worked with the industry to make this a national program which started in 1991. It was about this time that Baby #2 (our son Dan) decided he wanted all my attention when I was pregnant, so I had to stay in bed for a couple months. My capable colleague, Elizabeth Pivonka, took over from me and later served for many years as the president of 5 A Day which became the Produce for Better Health Foundation.

After returning from maternity leave, my responsibilities shifted to cover marketing and membership. I was also responsible for working with a contract company on a US Agency for International Development program that focused on Central America. Working with the export associations in this area opened new opportunities.

Since the early 1990’s, I worked exclusively with international programs. That included sharing the 5 a Day program with Mexico, the Philippines, Spain, Argentina, Chile and more. PMA developed a fledgling representative program in Central and South America, Asia, and Australia. I traveled throughout these regions as well as to events in Europe, Latin America, Singapore and Hong Kong to showcase PMA and learn more about the needs of the industry. Coordinating the International Trade Seminar that was held the day before the PMA convention gave me the chance to work with volunteers and staff to bring together the global produce industry.

In 1994, we created the International Advisory Council, comprised of industry volunteer leaders from many parts of the world. The first meeting was held in Washington, DC and that was the last meeting held in the United States. This group, now called the Global Development Committee has met all over the world, helped to introduce PMA to the local industries and guide PMA’s global growth.

PMA now has representatives in Mexico, Brazil, Chile, South Africa, and China. There is an affiliated PMA in Australia/New Zealand. A staff vice president works from her home office in Belgium. Global membership has grown significantly and is well represented on the PMA Board of Directors. The industry is dependent on growers, buyers, and suppliers in countries around the world and PMA reflects this.

The basic purpose of an association is to bring people together to do what they cannot do individually. Think of the work that PMA has done regarding food safety, produce technology, traceability, nutrition, research, global connections, training, and more.

Also important is the opportunity to come together in conventions, expositions, and conferences to make new business contacts, reinforce existing ones, and learn about the key trends and issues in the industry.

Being a volunteer leader in PMA has helped thousands of people grow professionally and personally through their participation on committees and boards. They’ve made friends, established business partnerships, and develop new skills. I remember one volunteer, years ago, who was so nervous he could barely read a prepared script in front of a small group of people go on to speak naturally in front of thousands.

Trends that will continue to impact the industry

There are many trends that impact the industry.  Allow me to look at a few.

Taste. If it tastes good, people will come back to buy it. But it needs to taste good each time. Without consistency, the industry loses credibility and the consumer. Advancing technology is helping in this area, but the industry needs to be disciplined to provide what consumers expect. Certainly, this is not easy to do when there is a lot of pressure to reduce food waste and get products to market and make a profit (and many more ‘and’s). But nothing in this industry has ever been easy.

Climate change and social responsibility. Produce companies will continue to be under pressure to monitor their carbon footprint, treat employees with care and respect, and take care of their operations in a sustainable way. Transparency, visibility, consumer communications, increased certifications and more will stretch produce companies and make them work in new ways.

Supply chain. Dramatic increases in the cost of shipping, lack of trucks and drivers, ships piled up outside of ports, shortages of containers, and much more – all are major stumbling blocks to get products from the field to stores as well as from input suppliers to the growers. Through PMA and other associations, the industry needs to work together to address this issue.

Food safety, traceability. For years, PMA and the industry have invested heavily in resources, programs, and experts in these areas. The work here may never be done but is as vitally important now as it has been for the past decades.

Lessons Learned at PMA (and life)

I look forward to continuing to work with the people this incredible industry.