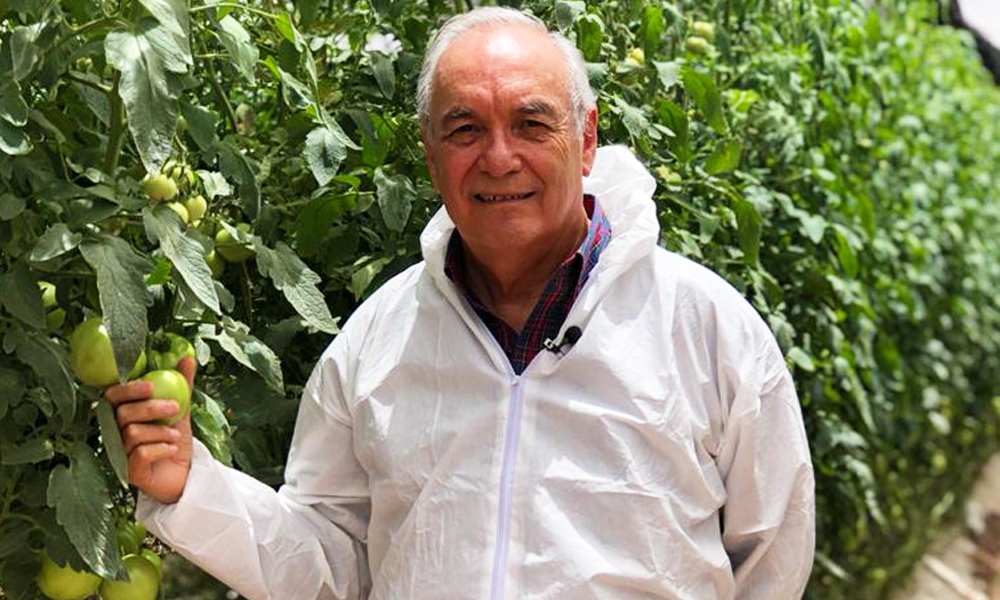 In an interesting interview for Veggies From Mexico, Mr. Mario Haroldo Robles Escalante shares with us his more than five decades of experience in the fresh produce industry and his leadership in Sinaloa’s growers organizations, the importance of having a brand that promotes Mexico’s fresh produce industry such as Veggies From Mexico, the changes he has witnessed and his perspectives for the industry in the coming years.

Mr. Robles share with us that all his professional training as an economist has been done in growers’ organizations and learned a lot from their leaders, since he started in the growers association of Culiacan when he was still a student. He worked in the National Union of Vegetable Growers during 18 years, bringing together the great majority of fruit and vegetable growers in 24 states of the country he also work in Kelly Distributing Nogales Az, working for a distributor broadened he’s knowledge base about the business relationships between growers and distributors and after that as Vice President of Operations for Northwest Mexico at Del Monte Fresh.

In 1997 he was appointed Director for CIDH, and he describe it like the “icing on the cake” because in that organization he have used all the experience gained in the sector over the past 55 years to support the Sinaloa growers members of CAADES, in solving their problems; In the defense of their interests and to contribute in the fulfillment of obligations related to Foreign Trade; as for example, related to the Food Safety or Tomato Antidumping Suspension Agreement, in which I have participated in the last 4 Negotiations; the USMCA negotiations in which I was appointed by the CMA to participate in the Fourth Meeting.

History and evolution of the fresh produce industry in Mexico, particularly in Sinaloa

I have lived through the years the evolution of the fruit and vegetable sector and it is impressive the changes we have experienced in the last 20 years. I know what has happened in Sinaloa in the last 3 generations because of the close relationship I have had with the growers.

The changes are determined first by the construction of the 11 dams that Sinaloa now has and 2 more in process, which began to be built in the 40’s, which allowed Sinaloa to open its irrigation districts, diversify its crops and now have 800,000 hectares under irrigation, of which only about 60,000 are used for horticultural crops.

The other factor has been technology, not only in the development of varieties that have increased productivity, quality and consistency, but also in the gradual transformation we have experienced from a traditional open field agriculture that evolved first to the use of plastics and drip irrigation, to later consolidate into vegetable production through protected systems like greenhouses, of which we now have more than 8,000 hectares.

Of course, information and communication technologies have also influenced not only the efficiency of production, packaging and customer service processes, but also the logistics of operations, which represents a great advance in the modernization of this sector.

Importance of food safety for the industry

Food safety has been a great challenge for everyone since President Clinton launched his first call to produce healthy and safe food. We can boast that in Sinaloa, at CIDH, we initiated the first project aimed at improving quality and safety, with the creation of a Growers Cooperative that approved some rules to standardize processes and minimize risks.

As director of CIDH, at the initiative of the United Fresh Fruit & Vegetable Association, we participated with other members of the industry in the development of the first metrics to evaluate compliance with food safety standards for fresh tomatoes, which later became the Voluntary Guidelines for growers and packers. The implementation of the Safety Guidelines was voluntary in both Mexico and the USA and this did not help much in the general adoption of the Guidelines designed by product or group of products, until the Food Safety Modernization Act FSMA was published. In Mexico, the Federal Plant Health Law was also reformed, and a section was finally incorporated to establish some rules for food safety, but its implementation was not generalized.

With the first outbreaks associated with Mexican melons and then undeservedly with fresh tomatoes, Sinaloa growers became concerned about establishing mechanisms for strict compliance with standards to differentiate ourselves from the rest of the country. For this, the Eleven Rivers Growers Cooperative was created, which designed standards of food safety, quality, sustainability, and social responsibility, which should meet each of its members, but also take by the hand the growers interested in joining the cooperative to the level where they could already withstand a certification audit to join. With the passage of time, Eleven Rivers Growers already has 13 companies that represent a volume close to 30% of Sinaloa’s vegetable exports.

Sinaloa is also the first state to have a State Plant Health and Safety Law, which aligns state standards with the Federal Law.

The critical mass of volume that Eleven Rivers has, now allows us to move to the next level, to promote in the industry the brand Veggies from Mexico with which we intend to give more certainty to the consumer a healthy, reliable and world-class product.

It seems to me that for a very long time Mexico will be the main supplier of tropical fruits and vegetables to the U.S. consumer public. Our proximity to the market, the availability of labor and the variety of climates that Mexico has, together with the modern production technologies that we have, allow us to produce in different climates, altitudes, daylight hours and times of the year; in such a way that any fruit and vegetable product can be available to access the American market at any time.

It is probable that the American consumer public and the new generations do not know it; but their grandparents, their parents, themselves and now their children, have been fed with products from Mexico; in such a way that today, for example, we represent up to 50% of the total supply of fresh products in the industry of that country. One out of every two tomatoes and avocados that reach their tables come from Mexico and it has done them a lot of good for their health.

Benefits of the anti-dumping suspension agreement

Problems with local competition have always been present and in 1996 we were sued for dumping of fresh tomatoes. The trade of this product with the United States was threatened with a tariff and we used the resources established in U.S. law to negotiate an agreement that would suspend the investigation and avoid paying tariffs that would increase the cost to the consumer.

I believe that the agreement has been beneficial for both us and the local growers, since the Mexican product cannot be sold below a Reference Price established in the Agreement, which represents a protection in favor of the local product.The agreement has been renegotiated 4 times since 1996 and this has allowed more than 700 exporting companies that have been signatories to the Agreement to continue participating in the market and continue offering the consumer public, the food service industry, supermarkets, but especially the housewife, the product of their choice with the highest quality and flavor.