Innovating over time with the farming sector in Sinaloa

Innovating over time with the farming sector in Sinaloa 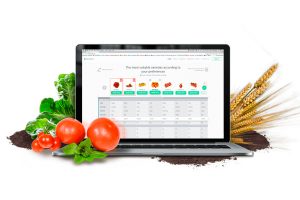 Farming exports in Sinaloa started at the beginning of the last century. As we have said other times, the first tomatoes were exported to the US in the 1920-1930’s. Most of the financing came from North American traders. And although in the marketing scheme we have not evolved as we would like to, there have been important events in production and packaging which came to revolutionize the industry. Let’s mention a few of these, and best of all, let’s mention some of these to be coming in the future.

The rod was one of the first innovations that came to revolutionize horticulture. They say that it was a Greek man, Chaprales, the first to use them. The benefits were obvious: from having a crop in the soil where fruits were touching the ground, to having the fruits hanging, came to facilitate their handling and obtain healthier fruits, with better quality and in greater volume.

On the other hand, having a strong seedling in the field makes the difference for what is coming in terms of production. We want healthy seedlings, with thick roots and a strong stem. A century ago, these plants were made in the ground. The aim was a space of land, it was raised a little and the seeds were sown in small squares. Generally, outdoors. Once these plants reached a certain size, they were taken to the field to be finally planted. The fact that the industry stopped making these seedlings, as they were known back in the day; and started sowing in dry ice trays, where each plant has its space and roots do not come together, in addition to doing it so, under the protection of a plastic greenhouse with automated irrigation, it certainly came to revolutionize the life of plants and their yields.

In matters of seed genetics, evolution was, of course, a key factor; with seeds that were producing more fruit and became more resistant to diseases, fungi and viruses. However, in the 90s, the revolution in the industry was represented by varieties that offered slower ripeness and a longer shelf life. It was possible to reach more places in the US and Canada and continue offering high-quality products with the Sinaloa seal.

The evolution in packaging technology was also a cornerstone to ensure the freshness of products being harvested. First with machined packaging where, by using sieves and motor belts, the packaging process was accelerated; which allows providing a variety of qualities and sizes to meet the various needs from customers. Later in the 90s; laser and photographic technology, dozens of photos were taken in just a few seconds for each packaged fruit, accelerated packaging times, cut down costs, and considerably reduced human and mechanical error while selecting sizes and colors.

Another revolutionary element was the contribution of drip irrigation. Although it was an Israeli technology discovered in the 60s, it arrived in Sinaloa in the 90s. All of this happening before the skeptical eyes of growers, as they saw how a hose was barely dripping on each plant, against the traditional rolling irrigation; where thousands of liters were filling production furrows. Drip irrigation not only came to save water, but also to be more accurate in fertilizer application, breaking down the crop in parts, and based on the needs of each lot.

By the end of the last century, say around 1998; the first greenhouses and production shade houses appear in the valley. Also, many growers were not so trusting and unbelieving about them, and even more so when the summer winds knocked down some of them. However, protected agriculture technology had come to stay. It allowed to better care for crops against whitefly, trips, and hornworm. The best varieties aligned to this technology doubled their yields per hectare and the increase in quality of some crops such as cucumber was amazing. Currently, there are about 10,000 greenhouse hectares in Sinaloa, being a leader nationwide.

It can be noted that, even if it is not a technology itself, the use and certification of best agricultural and manufacture practices have been a significant step in perfecting the profession. While the main responsibility of farmers is providing healthy, nutritional food; it must come hand in hand with implementation and certification of criteria and practices which ensure quality, food safety and social responsibility of the sector. This had helped the grower from Sinaloa to beat his competitors from Florida and Georgia in quality management.

There are various turning points which have led growers from Sinaloa to be the best in the world. However, taking globalization and a more fierce competition into account, we have no choice but to continue innovating and evolving. What new technologies hold the future for us? Without a doubt, the use of AI, Big Data and 5G will provide powerful tools for the industry. Let’s mention a few possibilities.

There is a company in Israel, SeedWiz, which, based on AI, they recommend the best seed variety to have in your lot, even depending on the month in which it is planted. This is based on the results that each seed has had around the world in various climates, types of land, insects that affect them, as well as production and yield results. They have started their experiment with growers in California and will soon be all over the world.

In Sinaloa there are already companies using Big Data to make decisions. They use the information accumulated over the years on variables such as climate, temperatures, insects, humidity, applications for fertilizers and agrochemicals, varieties, luminosity and relate it to issues such as root growth, plant growth and yields; being this a computer that digests all the data and provides irrigation recommendations and forecasts, and applications that become remarkably accurate.

Now, imagine that all the growers in the state through the Cloud shared confidential data of their companies. Forecasts would be much more accurate. For them, this would require the trust of everyone to provide the information. This type of dynamics and technology is already used in African countries for decision-making.

From the point of view of new varieties, we must see hybrids offering not only quality and flavor. Currently, there is development of vegetables and fruits that provide a greater amount of nutrients than traditional ones. Imagine a tomato with twice the lycopene, or a red pepper with high levels of vitamin C, B6 or B9. As Hippocrates said 2,400 years ago, “May your food be your medicine, and your medicine be your food”, an idea that is becoming increasingly tangible.

So, fellow farmer friends, let’s take a look at the future with excitement for what is coming for the farming sector in Sinaloa. Let’s be curious and open enough to learn about new technologies and apply them to our fields. This is because we have learned to adjust the change we have achieved, not only by surviving, but leading the produce in North America.