What Are the Common Symptoms of Food Poisoning? – Veggies From Mexico

What Are the Common Symptoms of Food Poisoning? 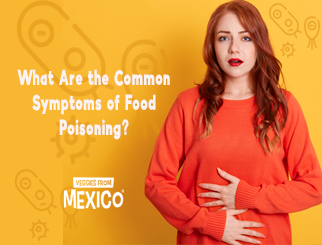 One of the ways to protect yourself and your family is to know the individual, specific symptoms of food poisoning that are caused by each pathogen. Each bacteria that causes foodborne illness causes different symptoms. If you know these symptoms, you will be more likely to seek medical care when needed.

When these pathogens contaminate food, and people eat that food, they can get sick. The bacteria start multiplying in the gut. Many start making toxins that irritate the intestines. If bacteria can get into the bloodstream, they can injure more organs and cause dehydration or sepsis, which is the body’s response to widespread infection.

There are more than 250 foodborne diseases, caused by bacteria, parasites, and viruses. We are going to focus on the most common pathogens that cause the most illnesses.

The foods that are most often associated with an E. coli infection are ground beef, raw milk, and leafy greens. It only takes 10 E. coli bacteria to make you sick. The type of E. coli that causes serious foodborne illness is called Shiga toxin-producing E. coli (STEC). This pathogen produces a toxin that travels through your bloodstream, attacking organs and causing serious injury and death.

The symptoms of an E. coli infection include severe and painful abdominal cramps and diarrhea that is usually bloody and watery. Some patients may have a mild fever. Symptoms start a few days to a week after exposure.

A serious complication of an E. coli infection is hemolytic uremic syndrome (HUS), which is a type of kidney failure. HUS usually affects children under the age of 5. Symptoms of HUS include little urine output, lethargy, pale skin, easy bruising, and a skin rash.

If you have diarrhea that lasts more than 3 days, and diarrhea that is bloody, see your doctor. Anyone with the symptoms of HUS needs to see a doctor as soon as possible.

This pathogen produces spores, which protect it from the heat of processing and cooking. Low acid canned foods that are not processed correctly, such as canned vegetables, sauces, and meat, are the foods most often contaminated with this pathogen, since it only grows in an anaerobic (low oxygen) environment.

When the spores survive, in a favorable environment, they will grow and start to produce the botulinum toxin. That toxin causes paralysis and death when ingested. Symptoms usually begin 1 to 7 days after the contaminated food is eaten.

Symptoms of botulism food poisoning include droopy eyes, double vision, facial weakness, dry mouth, difficulty swallowing or speaking, nausea, vomiting, abdominal cramps, and difficulty breathing. Paralysis begins with the head and progresses downward. Eventually, patients will suffocate if they are not given an antitoxin.

Anyone who is experiencing these symptoms needs immediate medical treatment.

There are only a few thousand Listeria monocytogenes illnesses in the U.S. every year, but the effects are serious. Most people who are diagnosed with listeriosis are hospitalized, and many die.

This pathogen is tricky, and it is very difficult to eradicate in food environments. The illness caused by this pathogen, listeriosis, can take up to 70 days to appear because the bacteria has developed methods to hide in the body. Listeria grows at refrigerator temperatures. Freezing doesn’t kill it. It can hide in crevices and cracks in buildings and in food processing equipment. It can even  survive regular cleaning methods.

The people most affected by this infection include the elderly, infants, people with chronic illnesses and compromised immune systems, and pregnant women. Healthy people do not often contract this illness.

The symptoms of listeriosis include high fever, stiff neck, severe headache, muscle stiffness, nausea, and diarrhea. Pregnant women are quite vulnerable to this infection. Their symptoms are typically minor and may seem like the flu. But listeriosis can cause miscarriage, stillbirth, premature labor, and infection in the newborn.

There are more Salmonella infections in the U.S. than any other type of food poisoning. The pathogen causes more than 1 million illnesses every year. Any food can, and has been, contaminated with this bacteria.

To illustrate the fact that this pathogen can contaminate just about any food, the most recent Salmonella outbreaks have been linked to ground beef, eggs, raw turkey, chicken, cake mix, and tahini.

The symptoms of Salmonella food poisoning include a fever, nausea, vomiting, abdominal and stomach cramps, and diarrhea. Symptoms usually start 12 to 72 hours after infection. Most people recover without medical care, but the long term consequences of this illness can include endocarditis, high blood pressure, irritable bowel syndrome, and reactive arthritis.

These illnesses are most often linked to raw milk, contaminated water,  and poultry. A multistate outbreak in 2018 was linked to pet store puppies.

The symptoms of a Campylobacter infection include fever, abdominal cramps, and diarrhea that is often bloody. Some people also experience nausea and vomiting. Symptoms start a few days after exposure.

This pathogen is most often associated with catered meals and meals served in institutions such as hospitals, churches, nursing homes, and schools. And there are Clostridium perfringens outbreaks in restaurants. It causes 1 million illnesses every year in the United States.

The pathogen is found in the intestines of people and animals. The foods it is associated with include large quantities gravy and stews, poultry, beef, and pre-cooked foods. When large quantities of food are prepared, then is improperly cooled or held at unsafe temperatures, the pathogen grows and produces a toxin that makes you sick.

One of the issues with bacterial toxins is that they are often heat-resistant. So even if the bacteria is destroyed by cooking, the toxin can remain effective and cause illness.

Symptoms of this illness include diarrhea and abdominal cramps. These symptoms occur suddenly and quickly, usually within 6 to 24 hours after eating foods contaminated with the pathogen. Because the illness onset is so sudden, many people go to emergency rooms for treatment, but most recover without medical care.

These pathogens are usually associated with raw oysters and seafood. The bacteria occurs naturally in warm waters, and the concentration of the pathogen in water increases during the summer months. This bacteria is not associated with pollution. Oysters are filter feeders, which means that they filter water and capture food, which can include these bacteria.

A Vibrio vulnificus infection can be deadly to anyone who has a compromised immune system or a chronic illness. That’s why food safety experts tell people in high risk groups to avoid eating raw oysters.

Symptoms of a Vibrio infection include abdominal pain, vomiting, nausea, and diarrhea. These symptoms usually start a few hours to a few days after exposure. High risk patients can develop shock. And the fatality rate for high risk patents who contract this infection is 50%.

Now that you know the symptoms of food poisoning, you can protect yourself and your family. Keep abreast of recalls, especially for pathogens, and know when outbreaks occur. If someone in your family does develop any of these symptoms, especially if they have eaten any food associated with these pathogens, call your doctor.