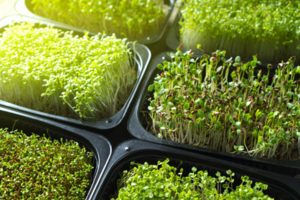 Microgreens growing operations are an emerging industry and the topic of research that surveyed growers in the United States. The online survey, answered by 176 growers, included questions about farm demographics, growing techniques, microgreen varieties grown and food safety practices.

The study helped identify relationships between farm characteristics and food safety practices, according to the research report.

The statistics show a significant relationship between growing media testing at least once per year and the total number of employees who directly handle microgreens. This possibly indicates that larger operations are better equipped to engage in routine quality assurance procedures, according to the report.

Passion behind the project

Gina Misra, a microgreen researcher, who worked on the project at the University of Arkansas with Kristen Gibson in the Department of Food Science, has a special connection to microgreens and small farm growers.

“For my whole career, I’ve been interested in agriculture and sustainability,” Misra told Food Safety News. She first got interested in indoor farming while working as a part-time research assistant in an astrobiology lab at Penn State in 2010 developing a closed-loop water treatment system for space flight.

For the next several years after that she worked as a molecular biologist, while her husband worked on helping build a research institute with some colleagues calledBlue Marble Space.

In 2015, Misra and her husband decided to start their microgreens farmGreenSpace as a Blue Marble Space initiative, partly to generate income for the company and partly to do science education and community outreach.

Misra said that very few commercial scale farms responded to the survey despite attempts to recruit them.

“So what we know from this survey applies primarily to small — less than $10,000 per year in microgreens revenue — beginning growers entering the market within the last 10 years.

“Microgreens farmers appear to be more aware of food safety than we expected — they had gone to food safety trainings and most had daily facility and equipment washing procedures.”

Another critical finding was that documentation practices among small farms were lacking, which are required by the Produce Safety Rule.

“Most farms did not test their growing media, probably because it isn’t required. However, we do know that soil can be a source of contamination for produce,” Misra said.

“It will help you keep track of things in case there is a product recall or other issue. Recalls do happen, though rare. We do our best to prevent them up front with good sanitation, but it’s always good to be prepared,” Misra explained.

Misra continues to work at the nonprofit research instituteBlue Marble Space and through their microgreen project. She is in regular contact with many small microgreens growers and their online communities.

She said she is hopeful that small microgreen growers read the paper to get the full picture, which can be found here.

The full study is availablehere.