Mexico produce picks up after slow start – Veggies From Mexico 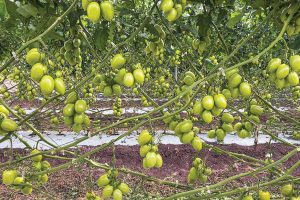 Rain and cold weather put a bit of a damper on the start of Mexico’s winter produce season, but distributors said temperatures — and shipments — were rising as February played out.

“We feel that February is going to be a very promotable month on dry veg items.”

Bell peppers, squash, cucumbers and roma tomatoes, mostly from Culiacan and Los Mochis in the state of Sinaloa, comprise the majority of the company’s product line at this time of year.

“All those items are going to be in peak production for February,” Ciruli said.

Snow actually fell in Nogales, Ariz., in early January, which is a rarity.

“We’re not a town that’s set up for snow,” Ciruli said. “We had to close the Mexican border because the roads iced over.”

Michael DuPuis, quality assurance and public relations coordinator for Divine Flavor LLC in Nogales, was optimistic about the remainder of the season.

“Usually February marks a key time for Western Mexico to be sending great quantities and great volume that meet that quality that retailers and our wholesale partners expect,” he said.

He referred to Divine Flavor as a one-stop-shop for retail partners looking for conventional bell peppers, mini sweet peppers and several kinds of tomatoes along with an organic line that includes the company’s Magnifico, a sweet organic grape tomato that continues to gain popularity.

Rio Rico-based MAS Melons & Grapes LLC will transition its honeydew and watermelon programs from fields in southern Mexico to the northern part of the country in early April, said salesman Mikee Suarez.

“There has been a little bit of weather in both of our regions,” he said, but not enough to cause any major disruptions.

Markets have been steady, he said, and quality has been good.

“Honeydews have been coming in fantastic — nice and creamy white with 10-plus brix,” he said.

“Our quality has been excellent this winter season thus far, and we are optimistic that it will continue throughout the spring,” he said in early February.

“Volumes are expected to increase during the springtime as we pack and ship from both growing regions of Jalisco and Sinaloa,” he added.

In McAllen, Texas, Frank Schuster, president of Val Verde Vegetable Co. Inc., said the quality of the carrots, broccoli and celery the company was receiving from Mexico was looking good.

He was concerned, however, about an overabundance of broccoli, which was creating an oversupply.

That’s likely to continue until shipments wind down from California and Arizona, he said.

The firm was scheduled to start receiving yellow, white and red onions from Mexico the second week of February.

Distributors in Arizona and Texas continued to cope with COVID-19.

“Because we’re on the border, we had the highest infection rate of anywhere in the state,” Ciruli said of the Nogales area. “It transferred from one company to another.”

Some importers struggled through the grape season “with massive infections breaking out inside their sales offices,” he said.

The coronavirus hit different companies at different times, but cases seemed to dropping by late January as workers began to get vaccinated.

In McAllen, Schuster said COVID-19 hit several departments at Val Verde Vegetable Co., but the firm was back to full strength by early February.

Distributors in both areas said they were putting more emphasis on retail sales as foodservice business dropped during the pandemic because of restaurant and school closures.

“We’ve been able to shift our direction,” Schuster said.

Ciruli Bros. sold more produce during the pandemic as a result of binge buying and an increase in retail sales, Ciruli said.

That feverish pace subsided a bit as 2021 got underway, he said, but he expected an uptick as schools and restaurants reopen.