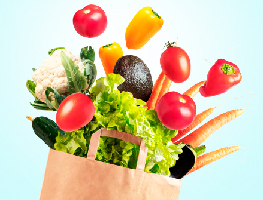 The pandemic brought heartaches of broken supply chains and spoiled perishable produce to the food-service sector, as many restaurants and schools shut down or dramatically reduced their volume as people practiced social distancing. But according to speakers at a recent Produce Marketing Association virtual food-service conference, once the crisis ends, it may leave people with a heightened appreciation of the health benefits of fresh produce.

“We have an opportunity with our food to create a healthier country,” said Bruce Taylor, a third-generation Salinas Valley grower and co-founder of Taylor Fresh Foods. “We haven’t done that yet, but post-pandemic will be a great opportunity to do it.”

Taylor made his remarks during the PMA Food Service Delivered series of webcasts in July, as the organization moved its traditional summer event in Monterey to the internet because of COVID-19.

As part of the conference, the association commissioned Datassential, a Chicago-based firm specializing in researching statistically significant trends in the food business, to survey consumer and food-service operator produce preferences during the pandemic.

“By a huge margin, freshness is the No. 1 attribute people are looking for in their food, followed by healthy,” said Jack Li of Datassential. “When people think fresh, their mind calls up produce. You are at the front of people’s minds when they think of freshness, and that’s a great place to be. Produce can help operators elevate the perception of their entire operation.”

He said the survey showed that behind the challenges of delivering and merchandising perishable produce to food-service outlets facing great disruption are trends that bode well for fresh fruit and vegetable growers.

“Cost, taste and variety are traditionally the most important reasons people choose a restaurant, followed by convenience,” Li said. “What’s in the No. 1 position now is cleanliness and sanitation.”

The survey also revealed differences between consumer preferences and food-service priorities that could be important in fruit and vegetable marketing for years to come.

“Eighty-one percent of consumers say, ‘Locally grown produce is important to me,’ but only 23% of operators consider locally grown when they source,” Li said. “That is a disconnect that is worth bridging. Sustainability will also be a big topic going forward. Consumers are more focused on energy use and things that are good for the Earth.”

Li said one of the challenges that figures to haunt restaurants for at least months to come is finding a way to minimize produce spoilage, when it is almost impossible to predict consumer demand.

“Sixty percent of operators order less frequently than they used to,” he said. “Operators are shifting away from fresh product because it can go bad, and many have moved toward frozen product. Short shelf life is a more important consideration than it used to be.”

He said restaurant operators “need more convenience-oriented product, because they don’t know how much traffic they will have, and they also want versatile products that can be used in multiple ways.”

“We’re trying to provide options that limit the need for labor at the restaurant level,” said Lisa Hearne, general manager at Taylor Fresh Foods. “Kits are also one of the fastest-growing salad items in food service.”

She cited as examples of labor-saving products romaine lettuce that is already trimmed, chopped and washed rather than whole heads, and single-serving packages of spinach, cabbage and other vegetables, which can be particularly important for school cafeteria operators who still want to serve healthy food even though their salad bars are shuttered.

Though demand for fruits and vegetables or value-added products may ebb and flow, Li said the pandemic appears to have created more people looking to fresh produce as a foundation of a healthy life.

“Many consumers say they want more produce now, because it boosts immunity,” he said. “People want immunity, and they see produce as a way to get it.”

Heightened interest in healthy foods has also been noticed by major shippers on the other side of the globe.

“People are looking to eat healthy and they’ve been eating at home,” said Steve Kent, general manager of the fresh produce and processing divisions of Bidfood, New Zealand’s largest supplier to the food service and hospitality sectors.

As the pandemic passes, speakers said, the market will sort out a tension between customer interest in sustainable options and the desire for food safety that may be best protected by plastic packaging.

“Packaging is back in vogue for food safety reasons,” said Michael Simonetta, CEO of Perfection Fresh, an Australian grower, processor and marketer of fresh fruits and vegetables. “Consumers are also more concerned with the provenance of their food.”

Kent agreed food safety has become even more important in the minds of many people, which is driving the use of more packaging.

But, speakers said, the clear, underlying message for produce is that people are more interested than ever in good health for themselves, their families and the people who provide their food.

“Health and safety were important before, but health has become very important, including the health of our workers,” said Darren Keating, CEO of Produce Marketing Association Australia/New Zealand.