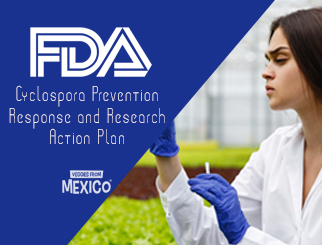 Today, the U.S. Food and Drug Administration released a Cyclospora Prevention, Response and Research Action Plan that outlines FDA’s strategy for reducing the public health burden of foodborne cyclosporiasis in the United States caused by Cyclospora cayetanensis (C. cayetanensis) in both domestically grown and imported produce.

Cyclosporiasis is a foodborne intestinal illness caused by the parasite C. cayetanensis. The number of reported cases of cyclosporiasis in the US has been rising in recent years, likely due in part to better diagnostic testing methods. According to the Centers for Disease Control and Prevention (CDC), there have been roughly 6,000 reported domestically-acquired cases of cyclosporiasis over the last 3 years. The number of reported cases typically rises during the spring and summer, from May through August.

Historically cyclosporiasis was associated with travel to or consumption of produce from countries where C. cayetanensis was endemic. In response to outbreaks of cyclosporiasis, FDA has taken samples of imported produce, inspected foreign farms and created import alerts in response to adverse findings. However, over the last several years Cyclospora has been increasingly confirmed in surface water and on food grown in the US. This may be partially attributed to improvements in testing and surveillance tools that are able detect this parasite better than in the past.

Cyclospora was first found in domestically grown produce, cilantro, during a surveillance sampling assignment in 2018 which was not associated with an outbreak. Not long after, it was again detected during an outbreak linked to a salad mix made with ingredients that primarily came from domestic growers. Rising case numbers and the emergence of Cyclospora in domestically grown produce prompted the FDA to create the Cyclospora Task Force in 2019. The task force comprises multidisciplinary experts across FDA and CDC with the goal of reducing the public health burden of foodborne illness caused by Cyclospora in produce.

We have continued to see annual outbreaks of cyclosporiasis including as recently as 2020 where an outbreak linked to bagged salads caused more than 700 laboratory confirmed illnesses. To tackle this ongoing public health issue, the Cyclospora Task Force developed The Cyclospora Prevention, Response and Research Action Plan. The plan is intended to serve as a strategic guide to reducing the public health burden caused by this parasite through three priority focus areas: improving prevention, enhancing response activities, and filling knowledge gaps.

Bending the curve of foodborne illness is a key focus of the New Era of Smarter Food Safety blueprint, which establishes goals for a more digital, traceable, and safer food system. Key New Era goals will support the Cyclospora Prevention, Response and Research Action Plan, including advancing traceability and strengthening root cause analyses and predictive analytics.

The FDA looks forward to collaborating with the federal, state, local and foreign government partners, academia, and domestic and foreign industry to help achieve the goals of this plan. The agency intends to update the plan on FDA.gov to add or expand upon action items and to provide more information as key deliverables are met.