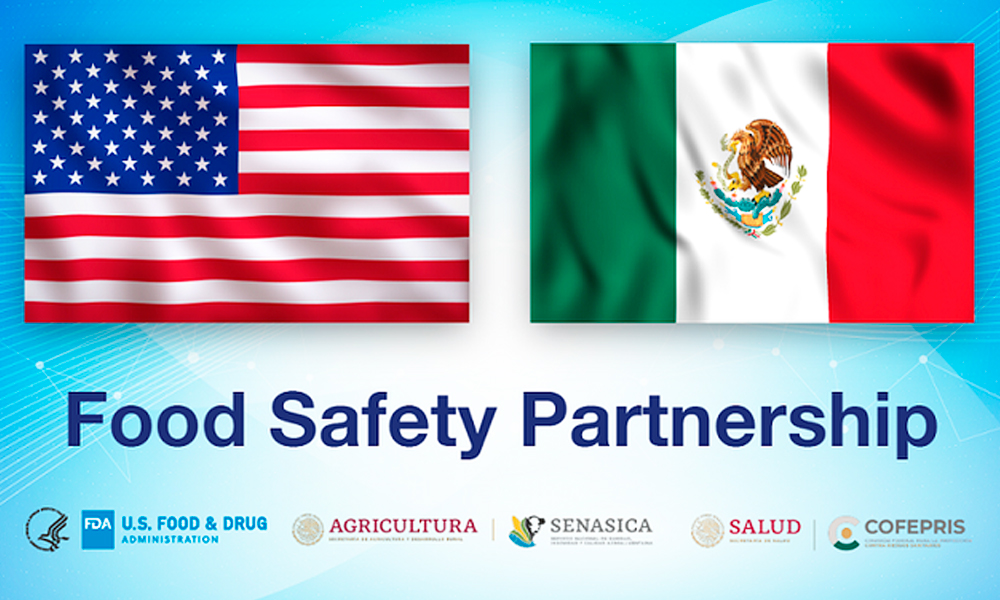 As part of its ongoing efforts to ensure the safety of food imported from Mexico and advance protections for consumers in both countries, the Food and Drug Administration (FDA) and its regulatory counterparts in Mexico — the Federal Commission for the Protection from Sanitary RisksExternal Link Disclaimer (Cofepris) and the National Service of Agro-Alimentary Health, Safety and QualityExternal Link Disclaimer (SENASICA) held the first Food Safety Partnership Annual Meeting on Aug. 20, an important milestone in food safety, said Frank Yiannas, FDA Deputy Commissioner for Food Policy and Response

The meeting builds upon the Statement of Intent that was signed in September 2020 to enhance the partnership between all three agencies to work together on food safety in both countries. A previous partnership, signed in 2014, focused on produce safety, while the current partnership has broadened the scope of products to include all human foods under the FDA’s jurisdiction that are traded between the two countries.

During the meeting, the FDA, SENASICA and Cofepris reflected on accomplishments from the past year and set goals for the coming year of the partnership, Yiannas said. He said the FDA plans to work closely with SENASICA and Cofepris on activities that will enhance communication and oversight and enable FDA to share its experience with new approaches. This kind of collaboration is critical because of the high volume of food trade across our border, Yiannas said. About one-third of all imported food into the U.S. is from Mexico, including 60% of all imported produce. As a result, the FDA, SENASICA and Cofepris work closely together on food establishment inspections and responding to foodborne illness outbreaks, as well as developing and implementing plans to enhance food safety in other areas of mutual public health interest.

The partnership aligns with the aims of the FDA’s New Era of Smarter Food Safety Blueprint through its core elements of tech-enabled traceability, smarter tools and approaches for prevention and outbreak response, new business models and food safety culture, Yiannas said. The FDA and its Mexican counterparts are working on four strategic priorities under the partnership: foodborne illness prevention (e.g., Salmonella in papaya and Cyclospora in produce), enhanced coordination for outbreak response, regulatory laboratory coordination (e.g., whole genome sequencing of foodborne bacteria, viruses and other pathogens) and food safety training opportunities for industry (e.g., produce safety and preventive controls for human foods).

A key element of the New Era of Smarter Food Safety Blueprint is the use of smarter tools and approaches, especially for foodborne illness prevention and outbreak response. The partnership is utilizing this approach by exchanging analytical methods to detect foodborne illness pathogens, such as Cyclospora. The alignment of laboratory protocols can help to improve detection and reduce the risk of exposure to foodborne illness. In addition, the partnership is increasing data sharing to improve outbreak response communications between the three agencies. The agencies are moving forward to update and refine the Binational Protocol (coordinated response) for outbreak response. These modern approaches will ultimately help better protect public health on both sides of the border, Yiannas said.

The partnership has also focused on ways to leverage SENASICA’s risk reduction standards and foster the development of industry best practices to further the safety of exported Mexican produce. For example, since September 2020, through collaborative efforts with SENASICA and the Mexican papaya industry, more than 300 growers have been trained on the Produce Safety Alliance’s grower-training curricula and about 90% of the Mexican papaya industry has been trained on papaya best practices. As part of a comprehensive effort to disseminate food safety training, the partnership will continue to strengthen work with industry on Foreign Supplier Verification Programs (FSVP) trainings for importers and the verification of papaya best practice implementation, Yiannas said.

Over the last year and in the face of challenges associated with the global pandemic response, the partnership has continued to facilitate outreach and training in multiple languages on the FDA’s Produce Safety Rule (PSR) and FSVP rule for the produce industry. Working to keep consumers supplied with healthy, safe and nutritious food, SENASICA and Cofepris worked with the FDA to promote virtual webinars across Mexico, Yiannas sid. The PSR is one of seven major rules established under the FDA Food Safety Modernization Act (FSMA) and includes requirements for produce that is grown domestically and imported or offered for import into the U.S. Next steps include assessing further outreach and training needs to enhance produce safety and traceability and supporting trainers to host additional grower trainings.

As the food supply becomes increasingly global, the FDA’s partnerships with its regulatory counterparts and food producers in other nations are more important than ever, Yiannas said. “We look forward to our continued collaboration on food safety and hopefully in-person meetings and trainings in the coming year.”