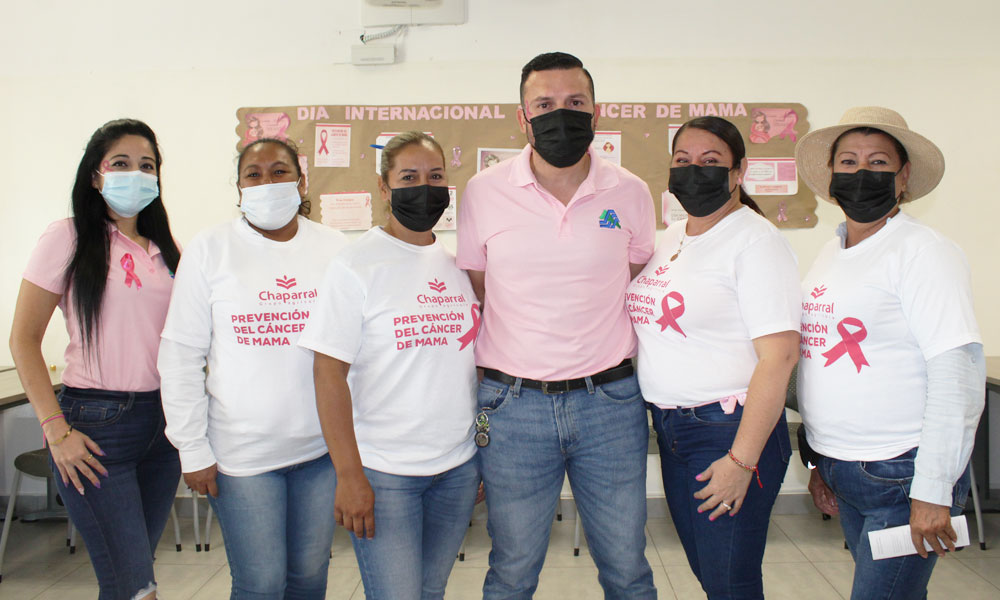 The following companies, being a part of Grupo Chaparral: Agrícola Chaparral, Agroindustrias Tombell and Villa Santiago Agroindustrias lectured a conference for their collaborators on Breast Cancer Prevention. The training was developed by the social responsibility area and the medical team making up the farming company.

Dr. Cristopher Arturo Moreno Munguía who is currently the State Coordinator of the Cervical Cancer Program at the Ministry of Health, was the one who lectured that training. This event was attended by the female collaborators of the company, and also the entire personnel of the company attended this event remotely.

Just as every year, Del Campo y Asociados developed yesterday their awareness day on breast cancer prevention. Among the activities to celebrate this day, there were some talks for farmer workers. Also, the management personnel of the company joined the celebration by wearing the traditional pink bow, which represents a symbol of solidarity for people who have suffered from breast cancer.

At Promotora Agroindustrial y Comercial del Tamazula, at the start of the month; a variety of posters were hung with infographics explaining what is breast cancer and the risk factors. The medical personnel visiting the company was providing information during the month on some techniques for self-examination, as well as solving doubts from female workers at the company.

By continuing these efforts of raising awareness and in the context of the Breast Cancer Day celebration on October 18, a talk was developed where Dr. Marco Antonio Roy and nurse Naara López Calderón performed a training that involved administrative personnel and the female field workers, who live within the facilities of the company.

This kind of actions contribute to the development of the health promotion program; which are the ones we evaluate in companies belonging to the Veggies From México Community, through weekly audits performed by the Eleven Rivers Growers technical team, reinforcing this way the quality of life of workers and their families.  The World Health Organization (WHO) set October 19 as the World’s Day of the Fight Against Breast Cancer, and the purpose of this date is to raise awareness and promote the outreach and support for timely and effective treatments, by prioritizing prevention strategies and early detection based on self-examination and mastography.

Currently, breast cancer is the most frequent cancer on women, both in developed and developing countries. Most breast cancer deaths are produced in low and middle income countries, where most of the cases are diagnosed at an advanced stage; especially due to the limited awareness and the barriers that hinder the access to health services.

Cancer is the second cause of death in the world. In 2015, it caused 8.8 million deaths. Particularly, breast cancer ranks first place in incidence of malignant neoplasms on women all over the world. According to the World Health Organization (WHO), cancer is defined as an uncontrollable cell growth and dissemination process. It may appear in almost any part of the body. A significant percentage of cancers may be cured through surgery, radiation therapy, or chemotherapy, especially if detected early.

In Mexico, breast cancer is the first cause of death due to cancer in 25 year-old women and older. This is a disease in which cells proliferate in an abnormal and uncontrolled manner in the breast tissue. It can occur in both women and men, although breast cancer in men is very rare.