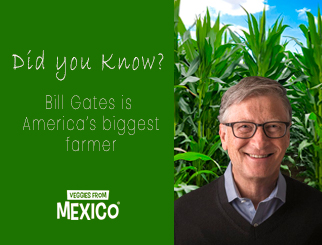 Bill Gates, the co-founder and CEO of Microsoft Corporation, has been interested in agriculture for a while now. Believe it or not, this has led to Gates becoming America’s biggest farmer. Bill Gates and his estranged wife Melinda Gates have accumulated more than 269,000 acres of farmland across 18 American states.

According to the Land report and NBC report, Gates has farmlands in Louisiana, Nebraska, Georgia and other areas. The report states that Gates has 70,000 acres of land in North Louisiana where they grow soybeans, corn, cotton and rice and 20,000 acres in Nebraska, there as well as the farmers grow soybeans. Additionally, they have 6000 acres in Georgia, 14,000 acres of farmland in Washington where the farmers majorly grow potatoes.

According to indiatoday.in, Bill and Melinda have invested heavily in farmland, but the reason behind that is not clear. Some reports had claimed that it could be connected to climate change. The couple had launched a new nonprofit group to help small scale farmers in countries like India with the tools and innovations they would require to deal with the effects of climate change.